I’m thrilled to announce that my novels After the Flare and Nigerians in Space were optioned by a major film company! This milestone is a huge vote of confidence in my writing, along with my 2018 Philip K. Dick Special Citation for After the Flare.

At the moment I can’t disclose too many details, but watch this space. The best way to help get my work onto the big screen is to buy my books, enjoy them, and tell your friends.

Thanks to everyone who has helped make this moment come to fruition — you know who you are.

Thanks to everyone who came out to the launch of After the Flare at Greenlight Books in Brooklyn. I had a great conversation with Yinka Adegoke, editor at Quartz, and celebrated the new novel with friends, fans, and family. Next stop on the book tour — Changing Hands Bookstore in Tempe, Arizona on Thursday, October 19. Find out more about the event here.

On Friday, I joined Data & Society’s Future Perfect conference, which aimed to explore “the use, significance, and discontents of speculative design, narrative, and world-building in technology, policy, and culture.”

For my part, I spoke about the apparent contradictions I encountered when writing my new novel After the Flare (Unnamed Press, September 2017) in a country where nomads and space technology co-exist. I also delved into how my work as a digital rights activist at Access Now informed the technology and questions I pose in the thriller, which is mostly set in the U.S. and Nigeria.

Here are some takeaways from the conference, in random order:

There were many more compelling conversations and presentations, so this is just a small sampling. You can watch the video of the conference here. Kate Ray also posted this excellent Tweet that compiles the books, games, and movies discussed throughout the day. (Click through to Twitter to read the full list of recommendations, since she replied to her own Tweet to compile the list.)

Starting a list of book suggestions from #futureperfect (also here https://t.co/L1BXjN6XDP on a book-mixtape-making site I just made)

Thanks to Data & Society, and particularly Ingrid Burrington (author of Networks of New York), who hosted and curated this enriching, diverse event.

I published this review of the film District 9 on my now-defunct blog Fictionthatmatters.org in 2009. Fashion designer Wale Oyejide mentioned District 9 during a recent Afrofuturism event in New York, so I thought I’d dig up this article from the archives. — Deji Bryce Olukotun 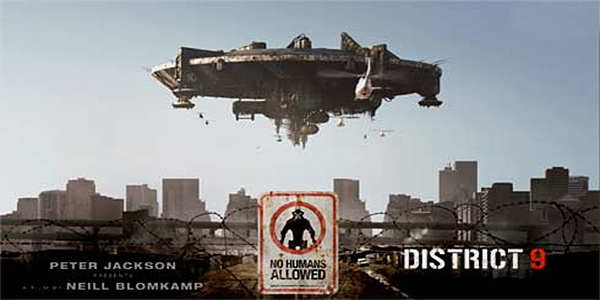 District 9 has taken the American box office by storm. The film depicts the arrival of aliens in the unlikely locale of Johannesburg, South Africa. Establishing contact with alien life forms in the movies is never as simple as we’d like it to be.

But this picture moves beyond a B sci-fi flick with some penetrating social commentary. At times satirical and other times allegorical, the story skillfully interweaves the history and culture of South Africa with mecha-robots and spaceships.

The vagaries of the film industry have resulted in the film being released in the U.S. before South Africa, subverting one of the central themes of the film — that America is not the center of the world. I still expect the reception in South Africa to be a positive one.

Here are 10 Things that you may not know about District 9.

Note: the following list does not spoil the plot of the film. But those wishing to see the movie with a blank slate should not read it.

The title District 9 is a play on District Six, a famous neighborhood in Cape Town located not far from the Central Business District. The area was known for its diversity and its thriving arts scene. Labeled unsanitary by the National Party, the government was also concerned that races mixed relatively freely in the neighborhood. It was consequently designated a whites-only zone and razed to the ground. The residents were relocated to areas both within and outside Cape Town. Today, the government is gradually rebuilding District Six. A phenomenal museum is dedicated to the neighborhood.

The alien ‘prawn’ ships in the film land in South Africa in 1989. During this time, the country was still under a State of Emergency and the ANC was a banned political party. Over 20,000 people were killed during the next five years. The Goldstone Commission revealed that much of the violence was instigated by the apartheid government by pitting ethnic groups and political groups against each other. Nelson Mandela was released from prison in February 1990. Richard Goldstone, who headed the Goldstone Commission, is currently investigating atrocities in the Gaza Strip.

In the film, Multinational United (MNU) is a large multinational arms conglomerate. Arms manufacturing remains one of South Africa’s largest industries. This is a direct product of the Apartheid regime, during which South Africa developed a strong military that invaded neighboring countries and maintained order within its borders. In fact, current President Jacob Zuma was implicated ‘by inference’ in a $5 billion arms smuggling scandal in 2005. This scandal resulted in Zuma being stripped of his post under Thabo Mbeki. A number of evidentiary blunders by a poor prosecuting team resulted in the case being dropped — paving the way for Zuma’s current presidency. The other figure involved in the scandal, Schabir Shaik, was sentenced to fifteen years in prison.

One bullet, one prawn

In District 9, one of the MNU mercenaries brutishly declares, “one bullet, one prawn” while attacking the aliens. This is a deliberate play on the mantra of the Pan Africanist Congress, an anti-apartheid political group. The PAC proffered a “one bullet, one settler” slogan, indicating that whites should be shot until power returned to indigenous South Africans. The PAC was pushed aside when Mandela’s more moderate African Nation Congress gained power — and never let go. Many former PAC ‘combatants’ are now serving jail time or are ‘unemployable’, meaning that they lack the skills to participate in the modern South African economy. In the film, Nigerians are portrayed as gun smugglers, pimps, and cannibals. Nigerians have had an unsavory reputation in South Africa since before the fall of apartheid. In truth, they occupy both the top positions in South Africa — as academics, businessmen, and activists — but also the lowest — as drug dealers and gun runners. Nigerian gangs have been known for violently dominating the tik (crystal methamphetamine) trade. While most Nigerians live peaceably, it is not uncommon for landlords to refuse to rent to Nigerians or for employers to refuse to hire them.

Organ smuggling and religious body part smuggling have occurred in Nigeria but it is clearly illegal and practiced by a tiny number of outlaws. Unfortunately, this reputation has resulted in some bizarre stereotypes. District 9 is at heart a satire but these images could use a *bit* more qualification. I write about these stereotypes in my fiction.

The photo above is Bankole Omotoso, probably the most famous Nigerian in South Africa, a professor and actor who became known by playing an elderly South African man for the mobile phone company Vodacom. All aliens are required to maintain identification in District 9. While many societies require residents to carry identification, South Africa has a particularly sordid history. Passes were utilized as a mechanism to control the non-white labor force in South Africa. The passes needed to be regularly updated and missing stamps or signatures could result in imprisonment or banishment to rural areas. Both Mahatma Gandhi and Nelson Mandela fought strongly against passes. The country remains an ID-obsessed country — particular with respect to refugees.

The word ‘township’ is an apartheid-era euphemism for neighborhoods divided along racial lines. Townships suffered from a lack of basic services and poverty. During apartheid, townships were routinely raided by the notoriously violent ‘Peri-Urban’ police force just like the MNU agents in the film. Today the settlements around Johannesburg, both legal and illegal, sometimes number more than 1 million people. Townships such as Soweto (the Southwest Territories) have permanent homes and shacks. The government is attempting to build housing to eliminate shacks but service delivery remains poor. For an amazing account of the township of Alexandra, located near a garbage dump like the one in District 9, check out Mark Mathabane’s Kaffir Boy. Mathabane went on to become an international tennis star.

In the film, the alien Prawns have an insatiable appetite for cans of cat food. Upon traveling to the Eastern Cape or other traditional territories, South Africans often advise bringing ‘sweets’ for the kids. They hand out candy and other treats in order to win affection and, often, safety. Such measures are suggested in order to prevent the children from ‘killing you for your wristwatch,’ a typical apartheid-era myth.

Both black and white MNU operatives work together against the Prawns. Although most films depict apartheid as having been perpetrated solely by whites, the South African Police Services did in fact have a large number of black officers.

The aliens utilize a strange, click-heavy language in the film. Yet some MNU agents learn to speak the language.

South Africa possesses eleven official languages, several of which use ‘clicks’. Xhosa has the most click consonants, having incorporated clicks from a variety of ethnic groups around South Africa, including the San. It is not easy for a non-native to learn to use these clicks and this is compounded by the fact that Xhosa is a tonal Bantu language.

The non-European sounds of Xhosa helped whites differentiate themselves from indigenous South Africans and emphasized their alien-ness. Archbishop Desmond Tutu famously stressed this point by forcing a white lawyer to properly pronounce his client’s name during the Truth and Reconciliation Commission proceedings.

I published a piece for Slate: FutureTense on Afrofuturism. In the article, I take a look at various trends unfolding within black thought and culture on science fiction and fantasy. Are black characters in scifi merely window dressing, or are they part of an emerging movement?

I interviewed Nnedi Okorafor, Ytasha Womack, Lisa Lucas, and Lionel Queen — all creators and publishers of color who are doing amazing work.

You can read the article here.